HARTING IT-Services GmbH & Co. KG, as an independent business unit, ensures smooth process organisation and guarantees IT operational readiness within the HARTING Technology Group. The team led by Manuela Kolodzeizik and Fabian Hein, Information Technology Specialists at HARTING IT-Services, is responsible for the administrative processes and controlling within the IT-Services unit, which acts as the central helpdesk for IT support for the entire HARTING Technology Group.

In regular workshop rounds, the team analyses the processes and infrastructures for their optimisation potential: "Which processes harbour which risks, which processes can we make more transparent and leaner, and where do we want to change in terms of perspective or strategy? How, for example, can a service management process look like in order to map the requirements of day-to-day business in IT service efficiently, in a structured and reliable way? And what instruments can be used to support this in a meaningful way? These are central questions that we deal with regularly in order to design possible process improvements on the drawing board," explains Manuela Kolodzeizik. Above all, the use of two parallel ticket solutions, one for the specific requirements of the SAP world and one for the other IT processes, caused additional work in processing and made it difficult to automate and evaluate the ongoing processes.

"Although these structures have evolved historically and to a certain extent have their raison d'être, we are reaching the limits of what is sensible and economically justifiable, especially from a perspective and with regard to the necessary freedom for the realisation of necessary process adaptations. Therefore, we have decided to consolidate our requirements in a new, central IT service management system. In the future, the user should have only one single point of contact (SPOC), regardless of which IT systems are involved in the respective process," adds Fabian Hein, who played a key role in the subsequent selection project..

As a specialist in electrical and electronic connection technology, the HARTING Technology Group markets innovative solutions for industrial applications. Since its foundation in 1945, the company has developed into a leading global supplier with annual sales of around 672 million euros (2016/2017). Visionary ideas, the highest quality standards, state-of-the-art technology and a consistent service orientation still form the cornerstone of the success of the third-generation family-run company. In order to ensure reliable, transparent and, above all, efficient IT support for the 4,600 employees in over 44 countries, the group of companies realigned its IT service in 2017 with the introduction of the ITSM platform EcholoN as a central service hub.

The company manufactures integrated checkout zones for the retail trade, electromagnetic actuators for both automotive and industrial series production, as well as charging equipment for electric vehicles and hardware and software for customers and applications (including in automation technology, mechanical and plant engineering, robotics and transportation).

For example, there was a lack of self-service functions to provide users with platform-independent access to their own ticket recording and transparent tracking. Furthermore, while the SAP-specific ticket system could not adequately map the infrastructural and service-oriented issues, the other system lacked above all the ability to represent the change processes in the SAP system and to ensure smooth, system-side communication.

The new service management solution not only had to map these requirements in a single system, but also fulfil a number of other criteria. For example, the future system had to be multilingual so that the approximately 1,500 employees outside Germany could also use the portal. The user interface was also to be based on the look and feel and ergonomics of today's Windows standards. In order to be able to react appropriately and quickly to escalations, the integration of emergency management and the connection to the documentation and inventory solution Docusnap were also key decision criteria. In addition, the new system should enable standard interfaces (among others to the asset management, to the active directory and to the existing telephone system) as well as a reliable integration of the configuration management database (CMDB). For the necessary process transparency in the service and a communication with the customers without media discontinuity, it was also necessary that the solution could also be used on mobile clients. After creating a detailed catalogue of requirements, the first step was to sift through the market to find suitable solution providers. In an iterative process, the long list of solution providers was narrowed down to a total of four, who responded to the requirements catalogues in the downstream tendering process. In order to get a better feel for the specific solution approaches, HARTING subsequently conducted on-site presentations with the remaining solution providers. "As it turned out, however, the necessary adaptation effort for mapping our requirements was extremely high for some solutions.

Here, EcholoN from Hamburg-based mIT solutions GmbH offered the best and most future-proof basis among the providers with the openness of the system and its process orientation," Manuela Koldzeizik emphasises. "In particular, the EcholoN Data Workflow System turned out to be a very comprehensive instrument here for linking processes across systems and networking our systems without even having to be programmed. It was therefore not only the most flexible instrument for our project, but also promised the lowest adaptation effort on the cost level in order to be able to better automate our processes in the future. We therefore 'unanimously' awarded the contract to mIT solutions with EcholoN in December 2016," Manuela Kolodzeizik sums up the decision.

Almost 100 users now work with the EcholoN system every day at the HARTING headquarters, as well as around 70 users via the 'extended workbench'.

The development of the prototype, system adaptations, training and test phase followed directly at the beginning of 2017. In April 2017, HARTING IT Services finally switched to productive operation with EcholoN. Assets, CMDB configurations or other data from the existing systems were not transferred. The company wanted to start completely new with the system, not take on any 'old burdens' and also restart from an organisational point of view. Old' tickets were therefore still processed with the existing systems, new tickets were then created in the new system.

With the system changeover, the opportunity was taken to also reorganise the entire process, such as how incoming tickets are handled internally. Previously, many tickets were first split up according to the tasks to be performed and then scattered in the respective groups. The procedure was subject to tight restrictions. For example, due to the system, it was only possible to delegate tasks once, which in no way met the actual requirements. "Such workarounds are no longer necessary with EcholoN, and many other things have become much simpler and more transparent with the new system. For example, users now have the option of configuring their workspaces or dashboard views themselves according to their role profile and individual preferences in order to keep an eye on all relevant processes and information. In the past, this had to be elaborately adjusted via permissions," Fabian Hein continues. "This also benefits the quality of service. Because important information and processes must not be searched for first, but must be visualised at any time in the push process, so that priorities and critical processes can also be handled effectively in the interest of the customers."

The fact that there is now only one central point of contact for all IT enquiries and tickets can be created by users directly via the web portal makes it much easier to record the processes and track them. Although support requests are still received by e-mail and have to be entered manually by the support team, the number has steadily decreased to less than half - which promises to make work much easier with around 3,000 tickets per month. As all tickets are now stored in just one system, HARTING benefits from an all-round view of ongoing processes, such as current resource utilisation, processing times or time recording data, thanks to the cross-departmental evaluability and the key figure-based controlling provided by EcholoN. This not only facilitates the identification of optimisation potential, but should also help to sustainably reduce the ticket volume in the future through professional problem management in the respective areas. 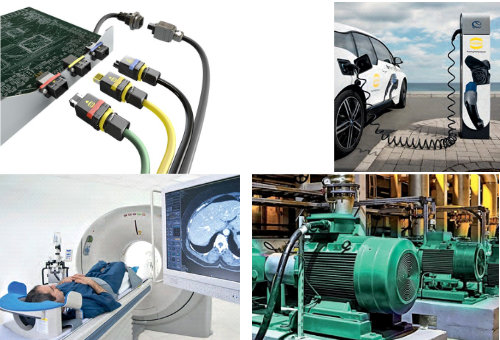 HARTING intends to successively expand these process improvements. For example, the onboarding process for new employees was put to the test and relaunched with EcholoN. After the formal hiring of a new employee, the support team now receives the individual requirements for the hardware and software equipment of the IT workstation, including the provision date, automatically as a ticket, so that the new employee is immediately ready to start with all instruments and accounts and the start of the job is made easier for everyone involved. After a year of use, HARTING has identified various other core processes that are now to be gradually streamlined, redesigned or standardised. The basis and hub for the continuous improvement process is always the EcholoN system, which makes handling these processes very convenient. Today, almost 100 users work with the EcholoN system every day at the HARTING headquarters, as well as around 70 users via the 'extended workbench'. Around 3,000 users also have access to the EcholoN Selfhelp Portal. In addition to connecting further HARTING companies, there are plans to further expand and automate the self-services functions in the future. There are also efforts to expand knowledge management in order to improve the quality of first level support with checklists or instructions for recurring problems or to provide customers with targeted solutions in advance..